This past weekend, I got together with a few of my friends with whom I journeyed to China some time ago.  We traveled to 6 different cities in the country over a period of 16 days, spent time bonding with students at a university in Wuhan province, sampled a variety of foods from various regions and cultures and mastered the art of the chopsticks.  I, at the time being one of the older participants, affectionately became known as Momma Hen.  Not that I’m much of a chicken about things, but I’m definitely a nurturer, sometimes to the point of annoyance. 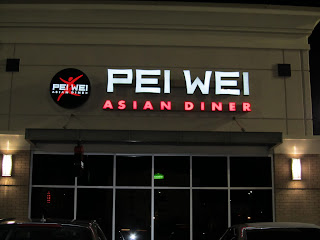 So some of the members of the extended family got together for another reunion dinner and ended up at Pei Wei.  Located at 2257 N Germantown Pkwy, Suite 110 in Cordova, TN, Pei Wei is the “to-go” subsidary of the P.F. Chang franchise.  The menu is not nearly as extensive as its parent company, but the food is just as awesome.I was craving a salad, the Asian Chopped Chicken Salad to be exact (I love vinagrettes and they put a mouth-watering sesame ginger vinagrette on this particular dish) but I observed that there was a limited-time only menu item available.  Despite knowing the next time I was able to dine in Pei Wei that I may not be able to choose this fare, I had to make a life decision and I decided to try the new offering, only after convincing myself that the salad would always be there for me in my time of need…
The dish that they had on the menu was the Korean BBQ and it was listed as one of their spicy entrees.  As much as I enjoy spicy dishes, the reality of the situation is that they make me cry and wreak havoc upon my sinuses.  Logic would make one avoid such delectables, but they also say that curiosity killed the cat.  I obviously survived, but not without a generous portion of water and a side of embarassment. 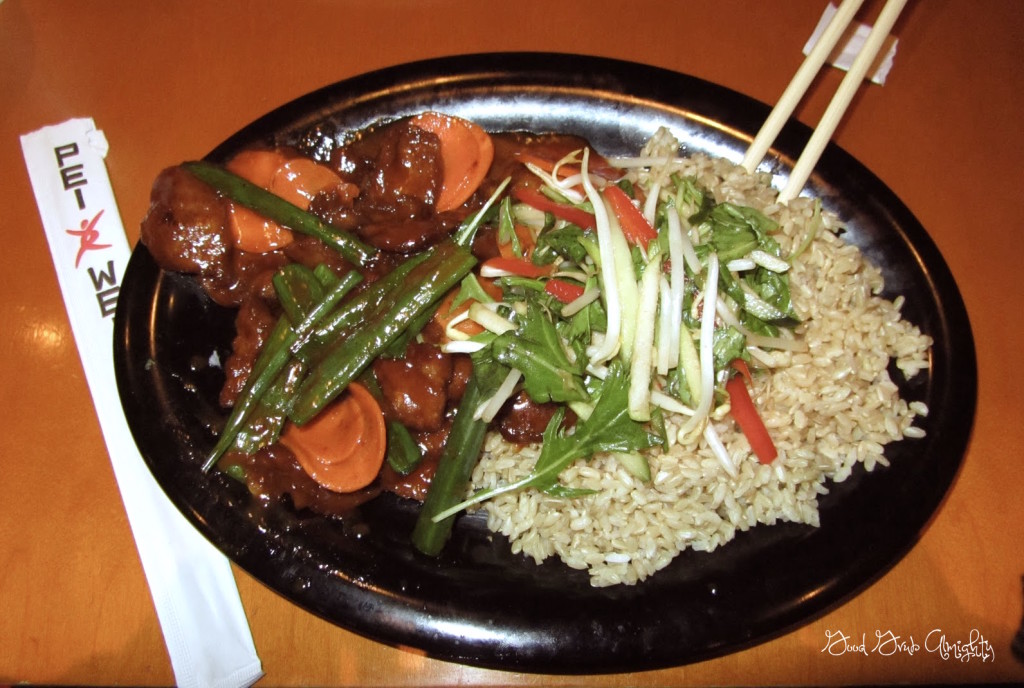 The Korean BBQ offers you a choice of chicken, beef, shrimp or vegetables/tofu (I chose beef) and is served in spicy Gogi BBQ sauce that is served with carrots, onions, scallions, Korean pepper and topped with a salad that is composed of thinly sliced green apples, sliced red bell peppers, mizuna (Japanese greens) and bean sprouts.  The picture on the menu, which influenced my decision, boasted sauteed sesame seeds.  I didn’t receive any of those in my order and was a little sad.  A member of our party ordered this same dish with chicken and received the sesame seeds.  Albeit very good and provisional of a different texture, the absence of my sesame seeds in no way detracted from the incredible flavor and contrasting palates of this dish.  I supplemented my meal with brown rice…FYI, if you have reservations about the spiciness of this dish, don’t eat the scallions.  I don’t know if it was the amount served with my meal, but that’s where the kick factor is.  After eating 2 whole pieces for flavor and sheer good measure, I pushed them aside to find the rest of the meat and let the restaurant have those back.
While I sincerely coveted the salad for the sake of satiating my craving for vinagrette, I thoroughly enjoyed this dish.  As far as the staff is concerned, they were incredibly friendly, efficient and accomodating, considering the fact that they were considerably busier that night than they usually are…anytime you can find good service under pressure is a plus in my book, and that’s one of the many things that keep me coming back to this restaurant.  If you’ve never eaten here and are not used to eating anything other than American cuisine, it’s a nice place to start venturing out.And as far as my China Dolls are concerned, “wa ai ne!” and I can’t wait until we get together again.  That’s “I love you” in Chinese.  Please forgive me for any misspellings just this once…To find a restaurant near you, just visit http://www.peiwei.com/. Happy eating and remember to grab a handful of fortunes cookies!

They don’t have those in China by the way.  Whodathunkit?