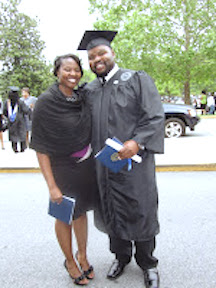 The mister graduated this semester, as did I, but unlike for my festivities, we were lucky enough to travel to Atlanta, GA for his celebrations.  Beginning the weekend with arguably the worst decision we’ve ever made, we made it to the heart of the Peach State only an hour late to the graduates’ meeting.  No seriously, try going to a wine and oyster tasting and summarily attempting to drive 6 hours after literally not sleeping for 26 hours straight…worst.decision.ever.  But despite our randomly exhausting spontaneity, and after many mini naps along the way, we made it safe and sound and participated in a wonderful celebration.
Post graduation inevitably involved a lengthy nap and when we awoke from our siesta at approximately 1030 PM, we decided we were hungry.  We called around to a few places and most establishments were closed or would be by the time we prepared to depart the hotel.  A phone call to our chosen location let us know that we could eat to our stomach’s content until 4 AM, so we gussied up and headed out to… 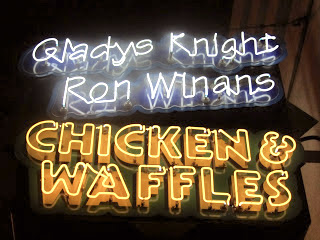 We’ve made quite a few trips to Atlanta and has always discussed going to Gladys Knight’s establishment, without being able to bring a visit to fruition.  But alas!  In the middle of the night, Ms. Knight’s restaurant welcomed us and our empty, disgruntled bellies with open arms.  True to Southern charm, the wait staff was very kind and accommodating.  There were even Arnold Palmers to drink (sweet tea and lemonade.)  We started our meal off with Jerk Chicken eggrolls, served with a cool ranch dressing.  Something that I’ve never seen, even in travels abroad, I absolutely had to try this and I can say that I was not disappointed in the least.  They were the perfect balance of spicy and light, and the cool ranch dressing served to bring out the jerk seasoning. 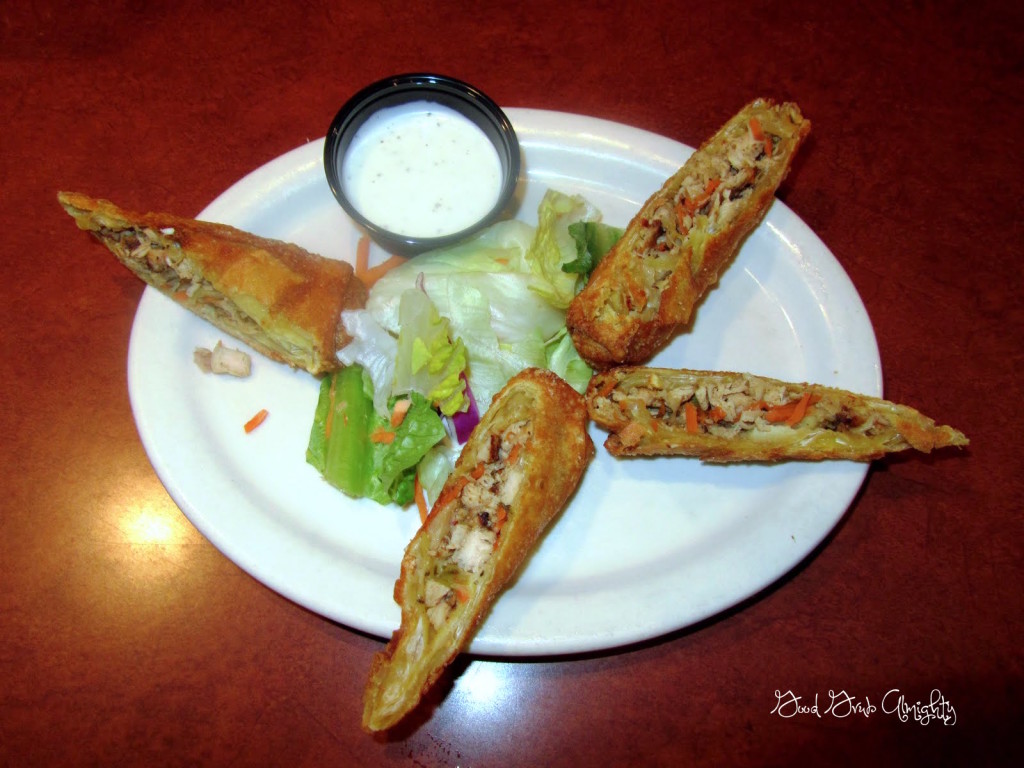 This establishment is well known for its Chicken and Waffles meal, but I wanted to stray a bit from that path.  He did order that dish because the special waffle of the evening was a cinnamon maple waffle and it was difficult to pass up.  I try to make sure that I taste everything that I write about, so I can honestly say that I have experienced the dish; I’ve found this strategy also gives me an excuse to eat off my honey’s plate. 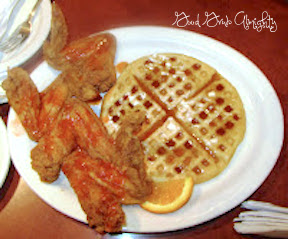 I chose the Smothered Chicken with yams, fried potatoes, white rice, and sweet cornbread.  Yes, at this point it’s about 1 AM and I’m ordering a platter bigger than my head.  I don’t pretend to be oblivious as to why my clothes are shrinking; I just choose to look the other way most of the time.  And after tasting something this delectable, I’m sure you’d look the other way as well.  It was just what the palate of a Southerner demands…large portions of meat covered in gravy, served with stuff covered in stuff.  I couldn’t finish the meal, but every seam in my stomach cheered me on to try.  The fried potatoes were my favorite part of the dish.  Served in the style of hashbrowns, this dish also contained red and green peppers and diced onions…just incredible… 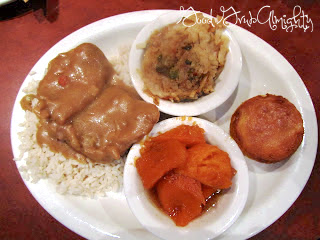 For good measure and to round out the experience, we ordered sweet potato cheesecake to go.  My two favorite desserts on this planet are cheesecake and my mother’s sweet potato pies and they’ve managed to combine them into a single dessert.  Whomever said that Heaven is on earth had to have sampled this cheesecake. 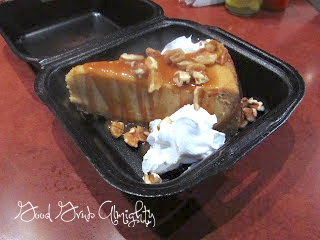 So if you ever find yourself in the ATL looking for a late night “snack,” please stop by and give them a try.  The only thing you’ll regret is not wearing pants with an elastic waistline.