You are here: Home / NaBloPoMo15 / I Am Afraid of This One Thing and I Am Not Ashamed

Ok, so today’s topic for #NaBloPoMo15 is bit of a touchy one for me. I didn’t even have to think too long of what it was because it’s always right on the surface. It’s something that is never far from my mind.

What was your biggest fear as a child? Do you still have it today? If it went away, when did your feelings changes?

Most people fear the same things. Failure, death, inadequacy, pain, loss. I share those concerns but none of them instill a crippling fear. Madame Marie Curie is quoted as saying: “Nothing in life is to be feared, it is only to be understood. Now is the time to understand more, so that we may fear less.”

Marie Curie was a brilliant scientist and far ahead of her time. I think it’s appropriate that she would always want to understand the science of things and how they work. If she were a biologist, I think that she could have contributed so much more to society and I really would have been able to benefit my life to this day. Not saying that, as a scientist myself, I didn’t learn and benefit from her work. I just really feel that as someone who studied and pioneered in the field of chemistry and radioactive materials, that she could have used that to figure out how to wipe out roaches…the one creature that can survive a nuclear attack. 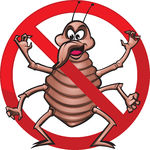 I hate roaches. I loathe them. Is there a word more intensive to describe pure disdain? I (that word) them. My skin is crawling as I type this.

So let me tell you what happened…

As I’ve mentioned before, my dad was in the Navy so we got to move around a lot and sometimes live in exotic places. When I was in middle school, we lived in Bermuda. This beautiful island was home to poisonous frogs, centipedes, Portuguese Man-of-Wars and this weird fish that had teeth and ate its way up my fishing pole. I’m not even lying; that pole is still sitting on the bottom of the Atlantic Ocean just off a pier. With all of that, nothing scared me more than the roaches.

Anyway, one night my brothers and I went to spend the night with friends. My mom specifically told us not to go outside once we got there. The house was literally 2 homes away, so she could look out the window and know. 5 kids “alone” decided that we needed some snacks and took a field trip to the local racquetball court, which was about the same distance in the opposite direction. We got our snacks from the vending machine and were walking back. On the way, I looked down and saw a roach. Me, designating myself as the harbinger of death for this insect, tried to step on it. I missed.

That sucker dodged my foot, turned around and ran up my leg. You ever hear the phrase “lost my $#!t?” I might have invented it that night. I screamed, shook it off and ran down the street. It chased me.

My life was never the same. To say that I’m afraid of roaches in a gross understatement.

About 2 years ago, one got into our house. My husband and I were sitting in bed watching a movie and something flew into our room. I thought “how in the world did a bird get into our house?!?!” And then it landed, pulled its wings in and crawled.

You could have started planning my funeral. I screamed and because he had his arm around me, I almost broke it trying to get through a brick wall in a feeble attempt to flee. He finally freed himself and I dove under the covers screaming for him to make it dead. As he’s laughing at me, I instructed him that if it landed on me, he had my permission to beat the crap out of me with the broom as long as it was dead. I would never tell anyone.

There was another incident where we were with friends at a restaurant. We made the mistake of sitting close to the door. As we’re sitting there talking, the girl sitting across from me looked down, gasped and shook her hand. I never saw the thing, but I knew what was up. I screamed, shoved my husband out of the booth, hurdled over his brother and was out. Did I mention that my husband is 6′ tall and 300 pounds of mostly muscle? He was in his brother’s lap.

There was another restaurant incident about 2 weeks ago. I was sitting in a high top stool and just saw it out of the corner of my eye. I screamed “Sweet Jesus!” and put my legs up and started shaking. Everyone looked at me and laughed, hubby went to kill it and the noise it made was akin to diving into a fresh basket of tortilla chips. The manager came over to apologize and when he looked into my eyes, stepped back a foot to clarify that he didn’t have it in his hand. He thought I was going to punch him in the face. I can’t say with any certainty that it wasn’t possible in the moment…

I am not ashamed to admit this at all. All have been warned that if you try to prank me with a roach, I cannot be held liable for my reaction. If I ever get over my fear I’ll be sure to let you know…

What was your biggest fear as a child? Do you still have it today? If it went away, when did your feelings changes? Tell me in the comments below!