You are here: Home / birthday / These Are a Few of His Favorite Things

Hubby turned 35 back in November and I’m just getting a chance to post his party! Oh, the horror! But we got a chance to celebrate a few of his favorite things for the big bash!

So a little backstory…I/we kinda started this tradition on his 30th birthday, 5 years ago, and because it’s only done every 5 years I have a little liberty on my spending for it. For his 30th birthday, I threw a surprise party, invited a bunch of his friends and family and even brought his mom + 3 of her besties down from Chicago to surprise him. I will never forget his reaction when his mom walked into the room…it was just awesome! I think if he was a crier, it would have happened at that moment lol

I then presented him with a gift box and told him I was going to ask him a question and he had to answer with a yes or yes; he shook the box to make sure that it wasn’t an engagement ring! It was a custom t-shirt inviting him along for a 7 day/6 night trip to Vegas and I’d already cleared it with his boss to be gone for the week.

So for 35, he knew that I was up to something… Since 2013, we’d been going to beer vs. wine tastings in our city and he’s was definitely getting more into beer. He started getting more curious about it over 2015, as craft beers have really started getting big here, so I knew that his birthday bash was going to be beer-related. I researched and found out that I could rent out a brewery! I decided to host it at Wiseacre Brewery and was so happy that I made that decision…the staff there is great! Since it was a surprise, I got to work recruiting friends, near and far, to help pull the whole thing off.

Hubby isn’t a complex man and when he likes something, he tends to stick with it, so coming up with the menu was pretty easy. I stuck with his favorite foods: popcorn, wings and threw in pretzels as a perfect pairing with the beer we’d imbibe. I had to make sure that the dessert table had some of his favorites as well, bringing in a homemade caramel cake, as well as, mini Snickers and Twix.

I’m fortunate to have some super talented party planning friends and my girl over at Sunny By Design made some custom printables for me. I used them a little differently and cut some pieces out to use as cake toppers and part of the signage. For the decor, I found several variations of his initial and had them staged on the different tables. I also used round punch outs of different designs in the theme colors and strung them up in banners. 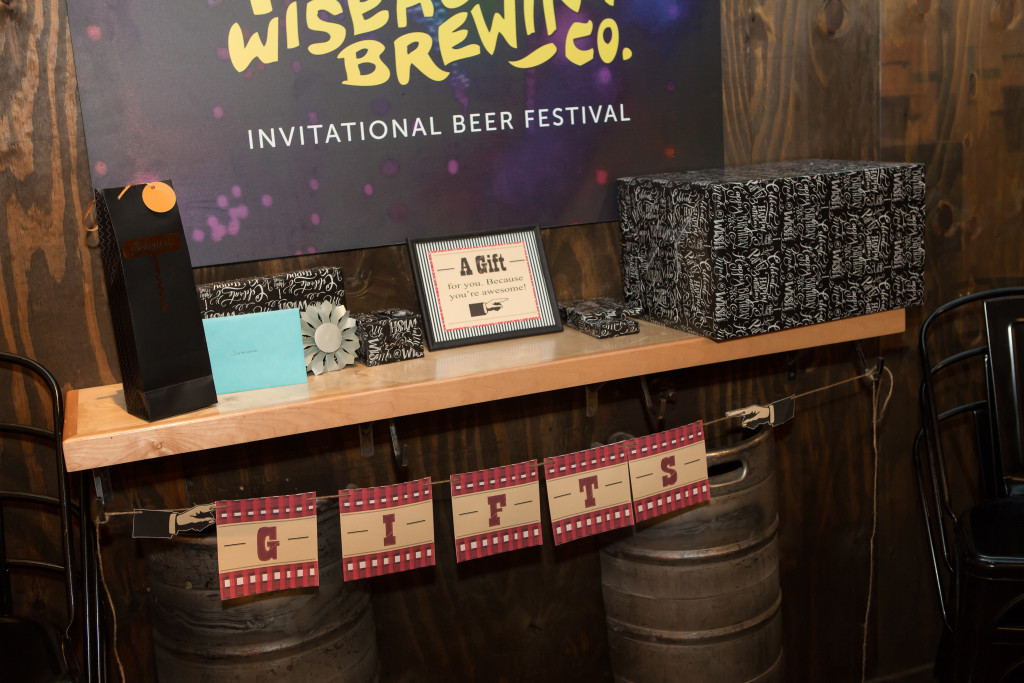 My gal at Celebration Lane had some honeycomb balls and tassel garlands for me to give it a little bit of flair, while keeping everything manly enough for him 🙂 My favorite part of the party was the DIY food station signs. I went our local Home Depot, got some wood, pulled out a pencil and got to drawing + cutting; I can’t wait to share the tutorial with you!

Since we were going with his favorite things, we set up a hot wing station, a pretzel bar and a popcorn bar. I ordered hotwings from one of our local digs and set it up with blue cheese and ranch dips. 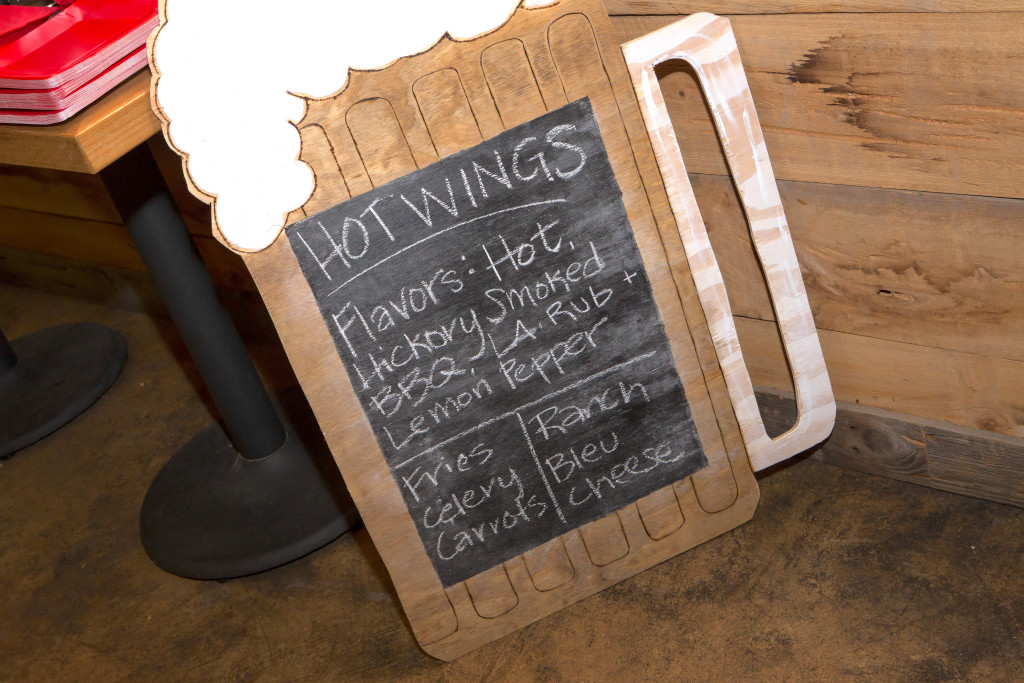 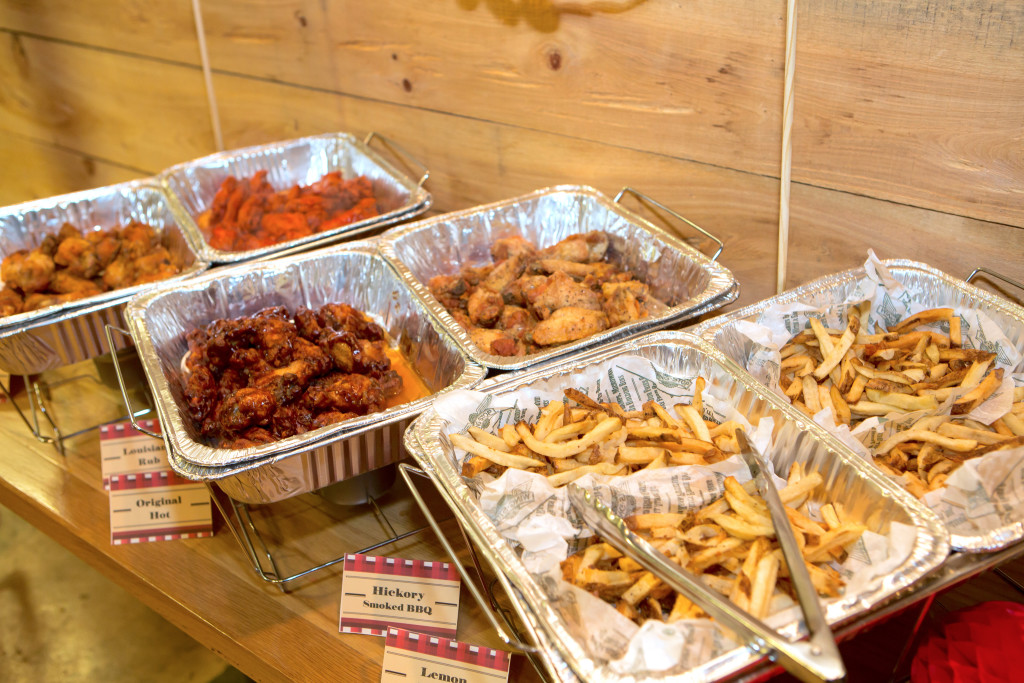 The pretzel station had regular and pepperoni pretzels and mini pretzel dogs, along with cheese and salsa dipping sauces + butter and salt to garnish them. 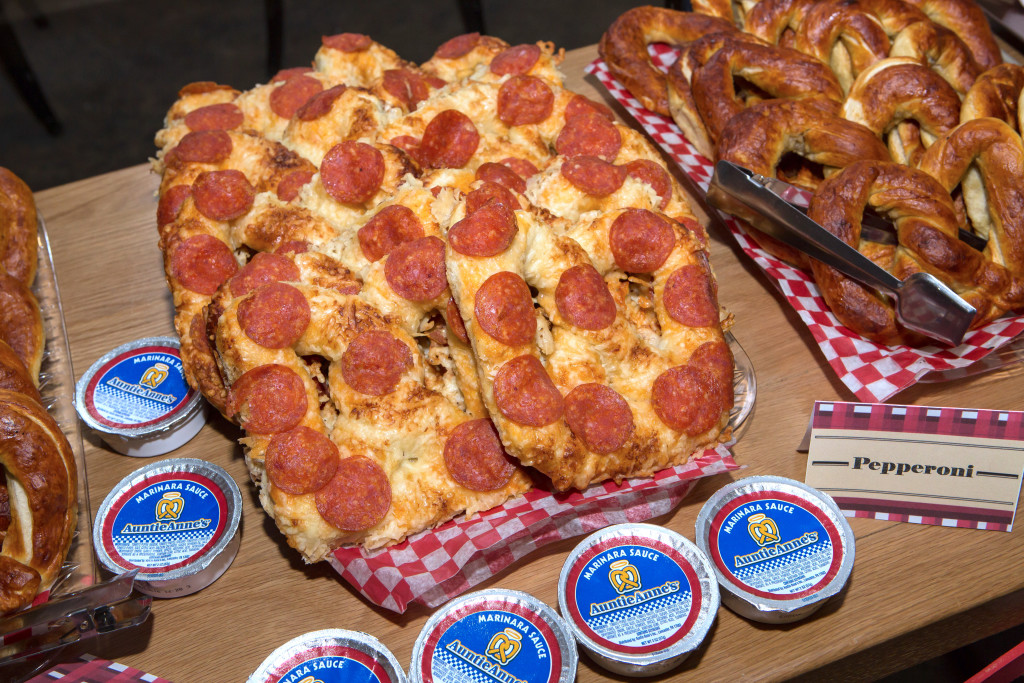 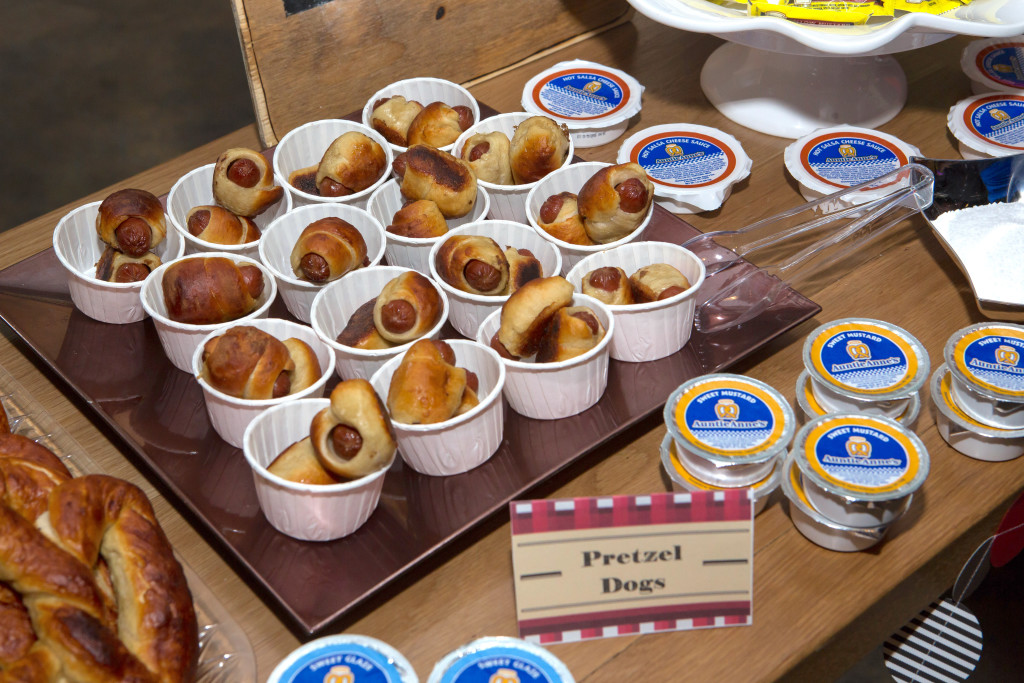 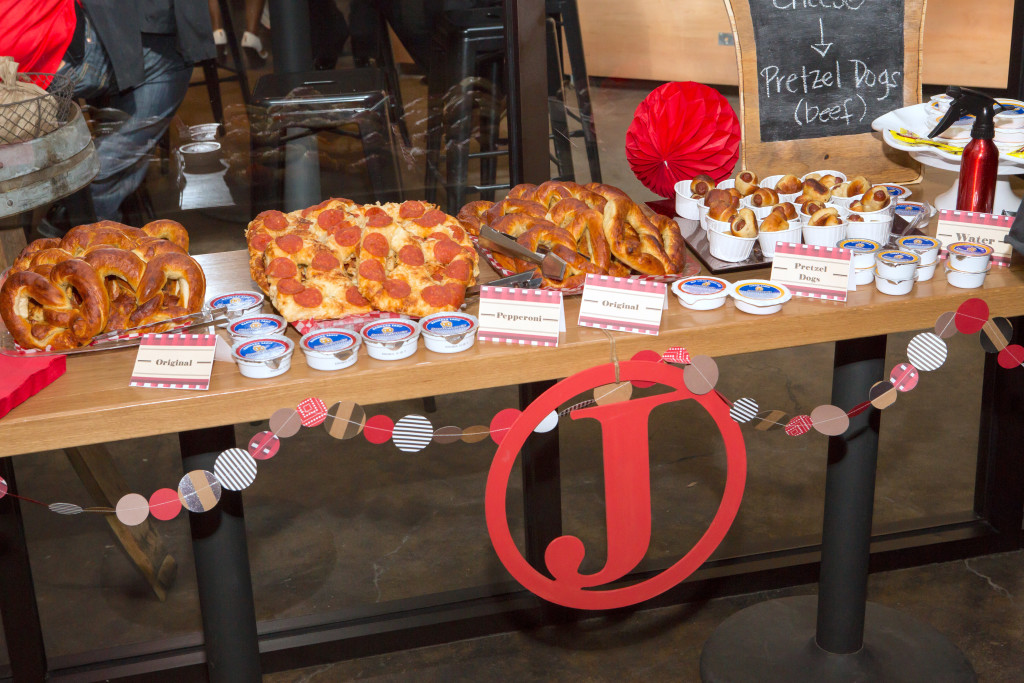 The popcorn bar was certainly his favorite! I was lucky enough to have a local friend who loves party stuff as much as I do and she let me borrow her full-size popcorn station. We also had Chicago mix (caramel and cheddar) and tuxedo mix (chocolate and vanilla) with several different seasonings from which to choose. 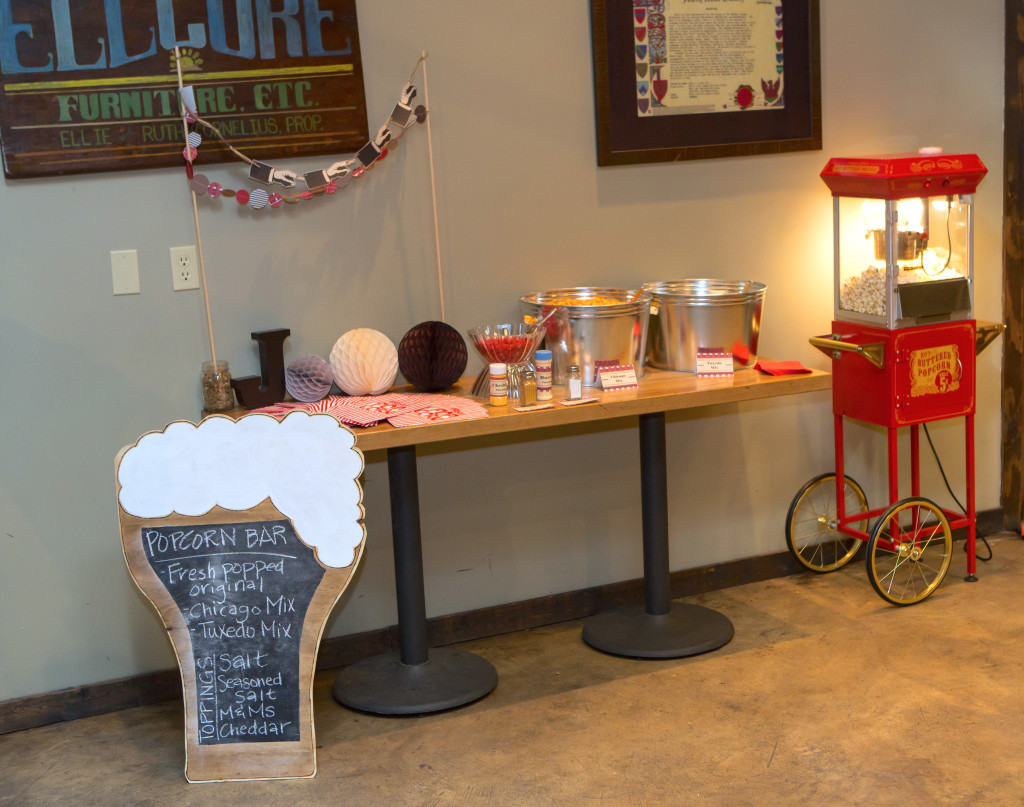 The dessert station took a hit pretty quickly. The awesomely talented lady behind Sparkling Sweets Boutique hooked me up with some chocolate covered Oreos, beer mug cake pops, and mini donuts; I made a beer glaze to put on top of the donuts. I made some of my decorated cookies for him, with some phrases that have been a part of our years-long running jokes and made some with his initials in different typographies; we also had the cherry jello cookies that he busted me making 2 nights before… We had to have hubby’s homemade caramel cake…I’d honestly never made one or had one so delicious until he’d made one for me in the early days of our courtship 🙂 We also had his favorite candy: mini Snickers and Twix. 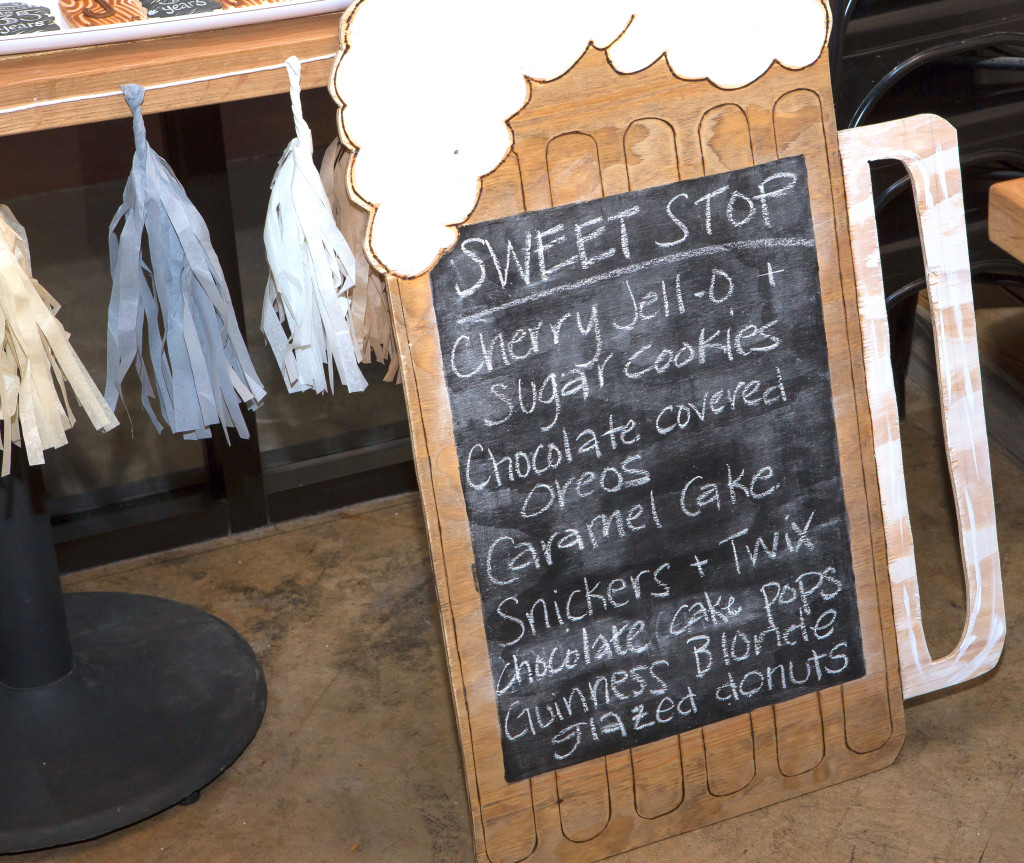 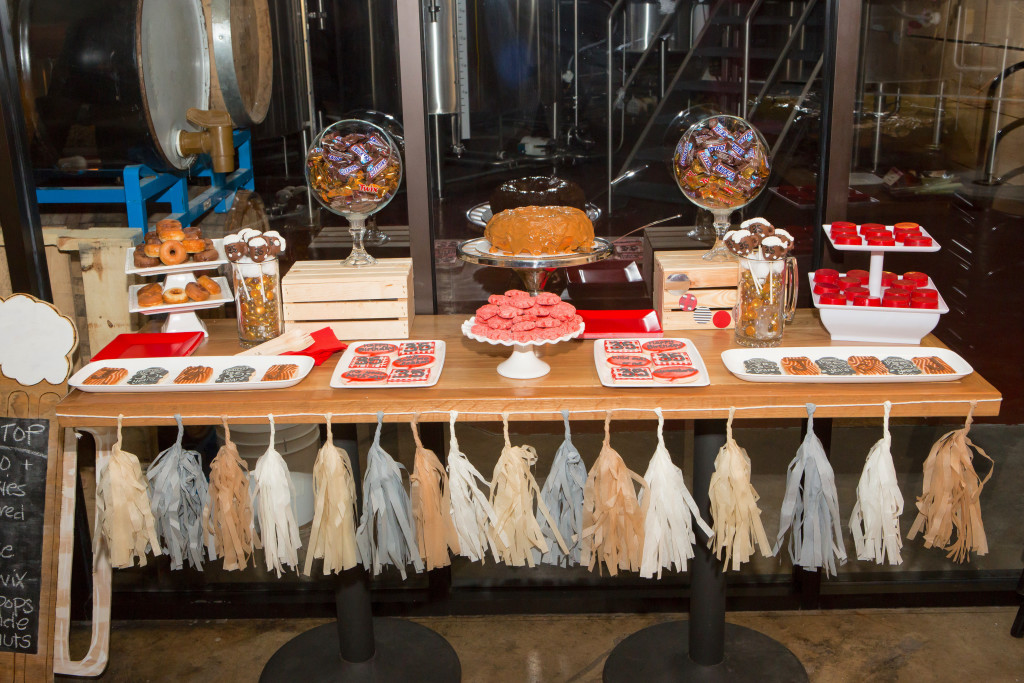 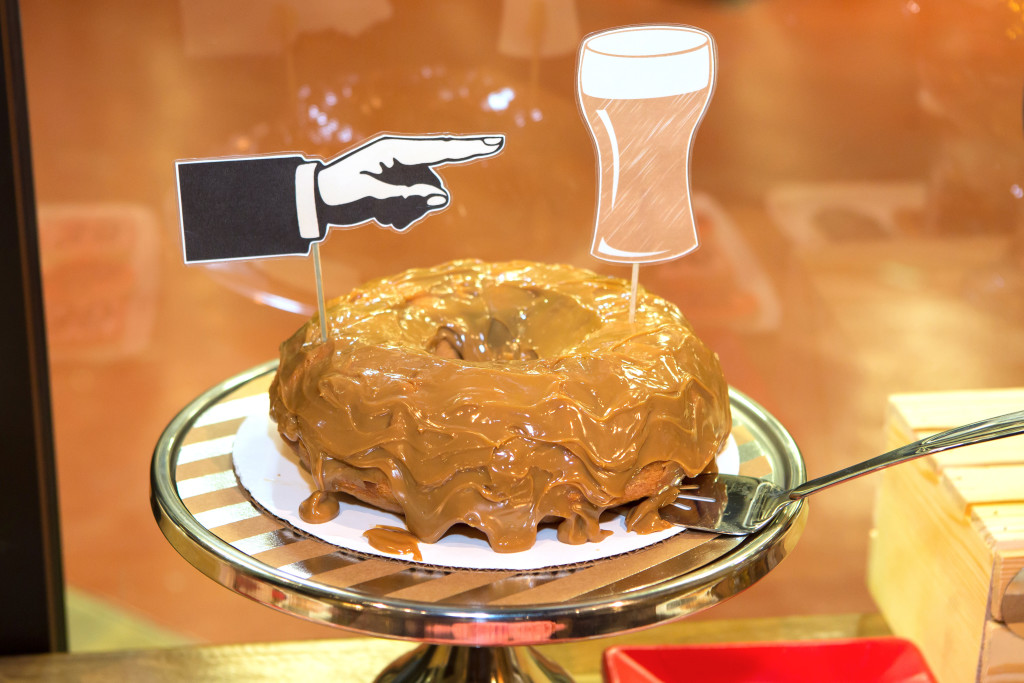 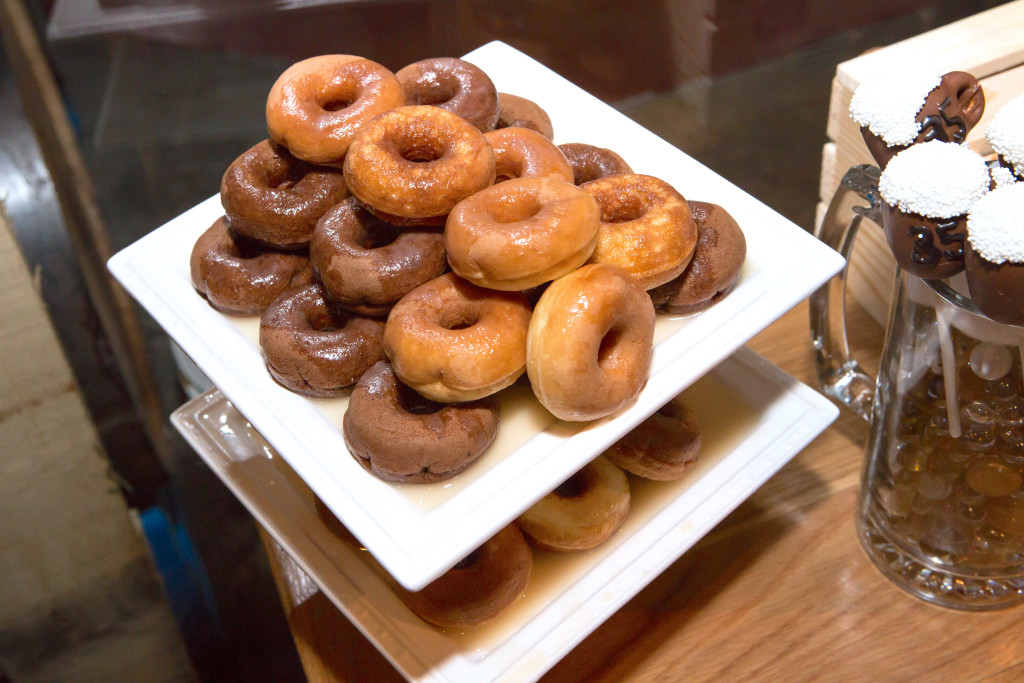 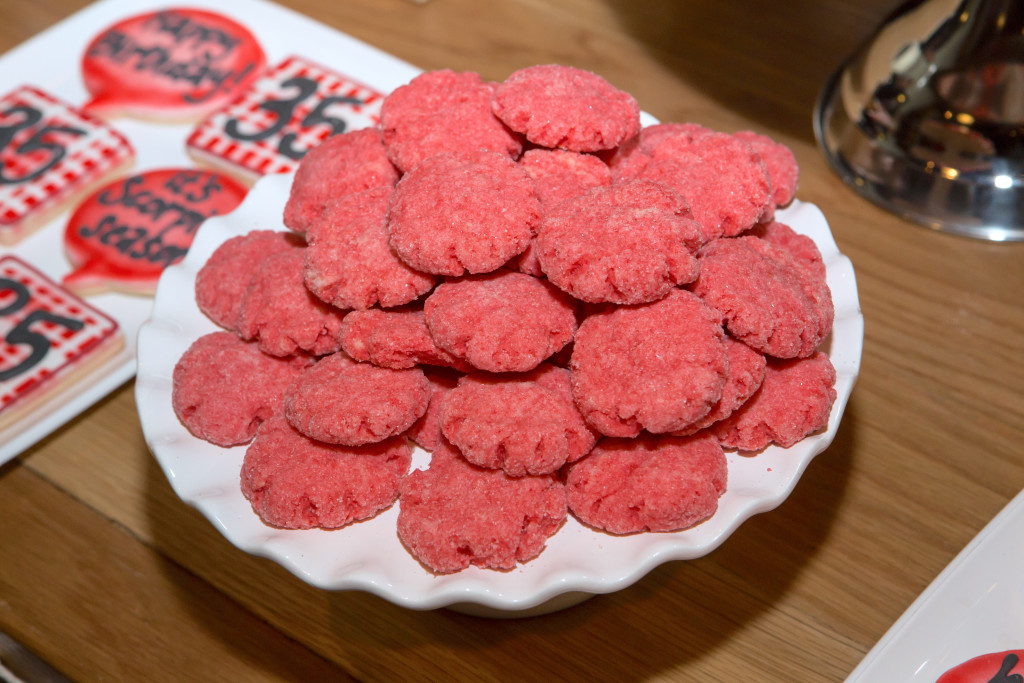 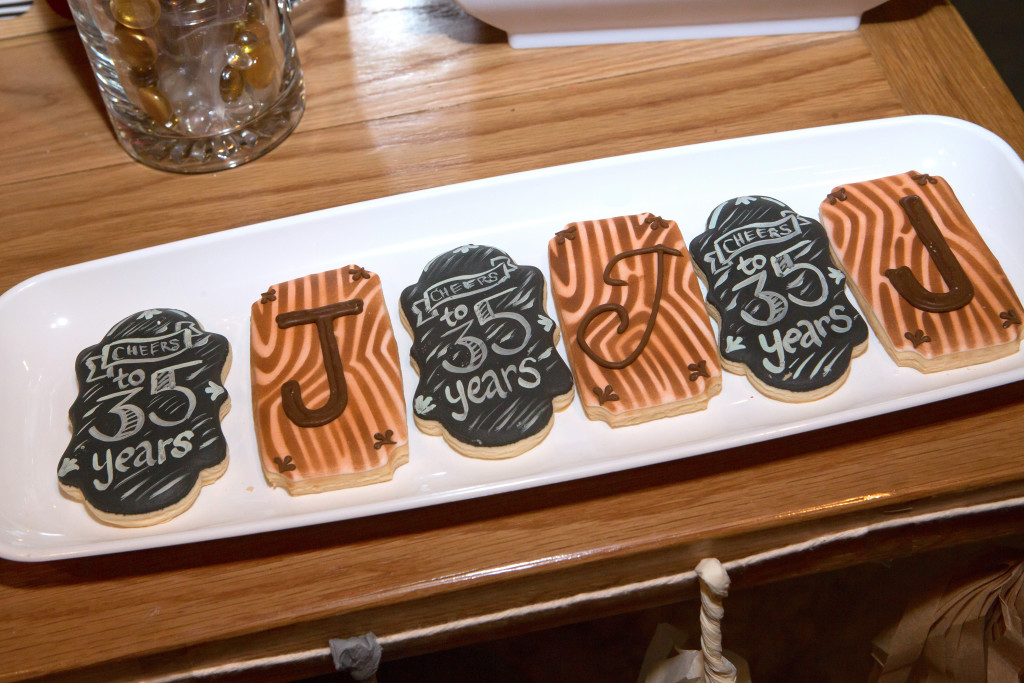 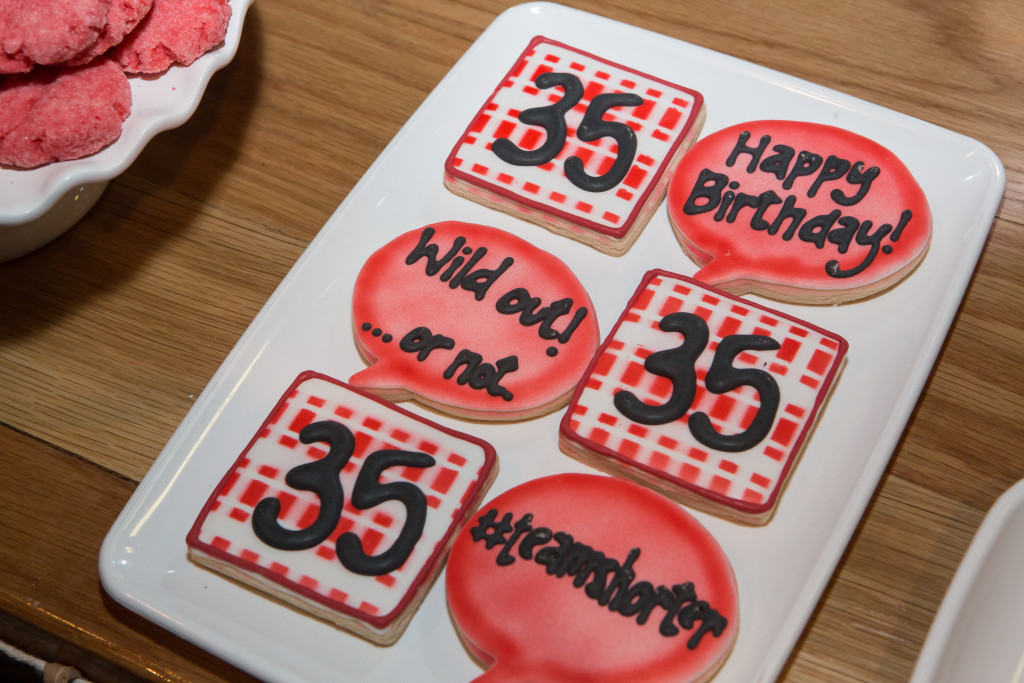 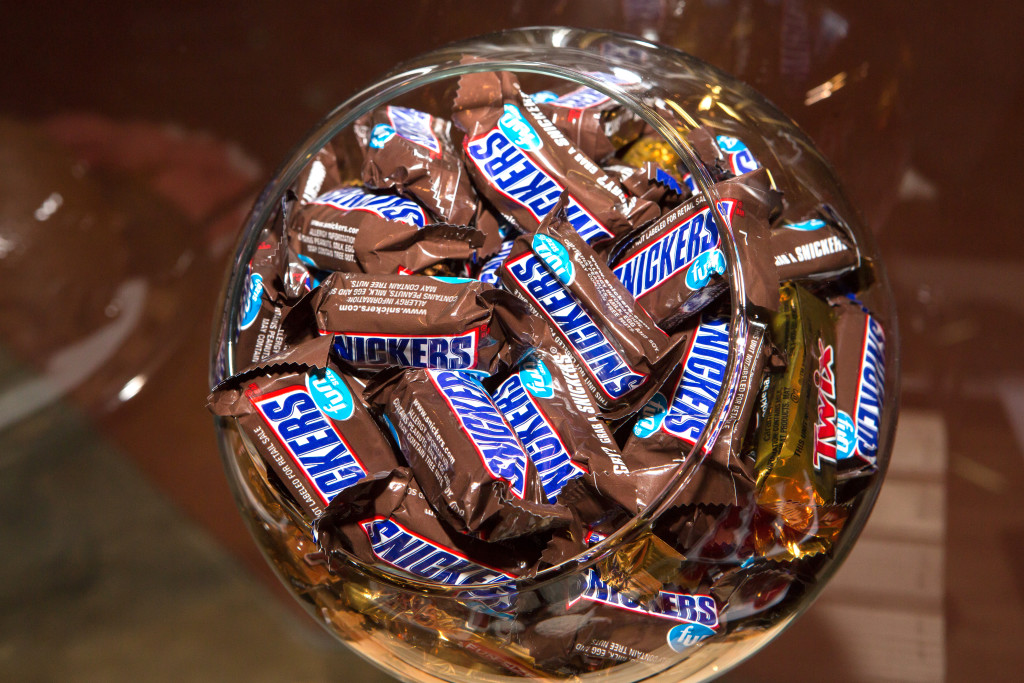 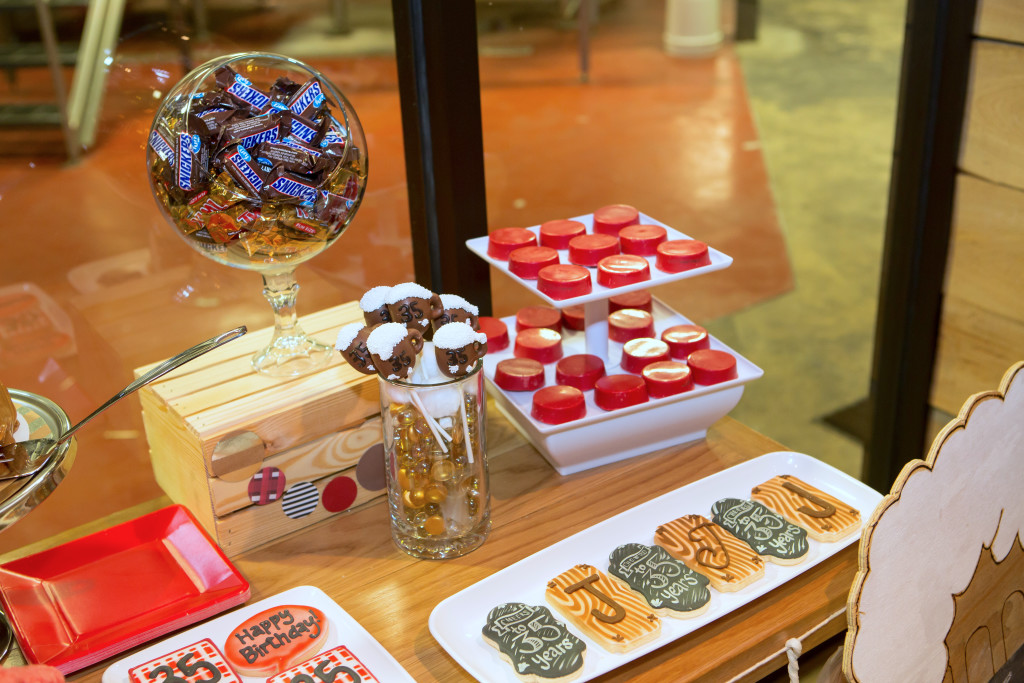 In order to pull this off, I had a team of folks to set everything up for him. We went out to dinner and then I told him we were going to a new restaurant I’d found for dessert. He recognized some of the cars when we pulled up (I completely missed them lol) so he thought that I’d gotten a few people together to meet us for a beer-making class. Many thanks to my friend Isaac who came to help capture all of the pics of the setup and to get him when he walked through the door. This picture that captured the moment he realized that everyone was actually there to celebrate him!

He got the chance to greet everyone…including his mom, who’d snuck in from Chicago again…and then the festivities began! We enjoyed an evening of beer trivia + education, got to enjoy some award-winning beer and dancing…all are definitely on his list of favorite things! 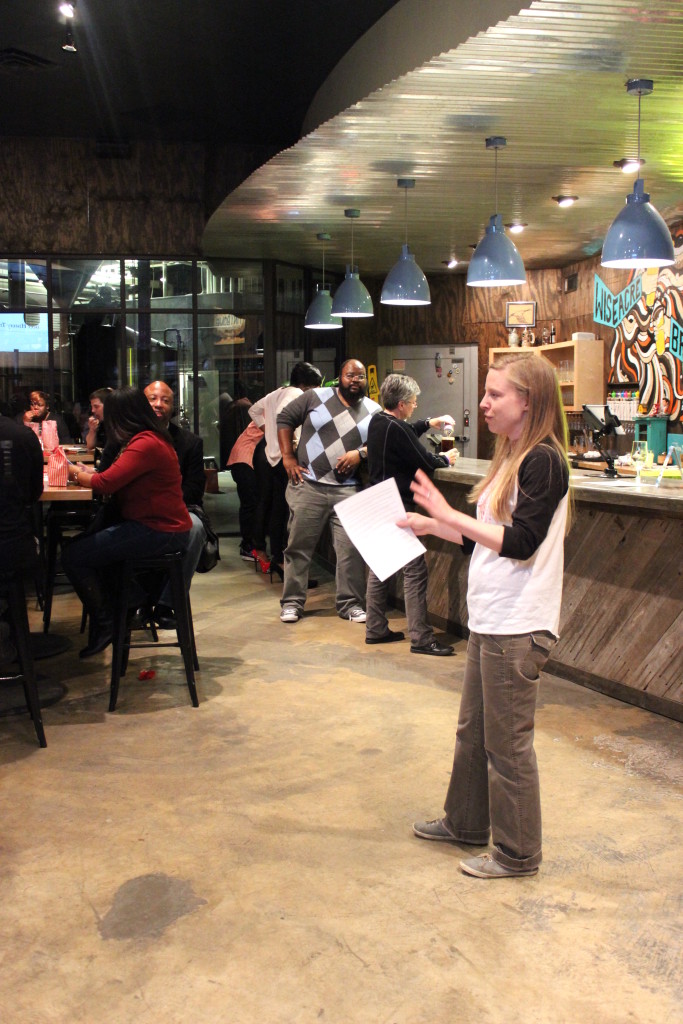 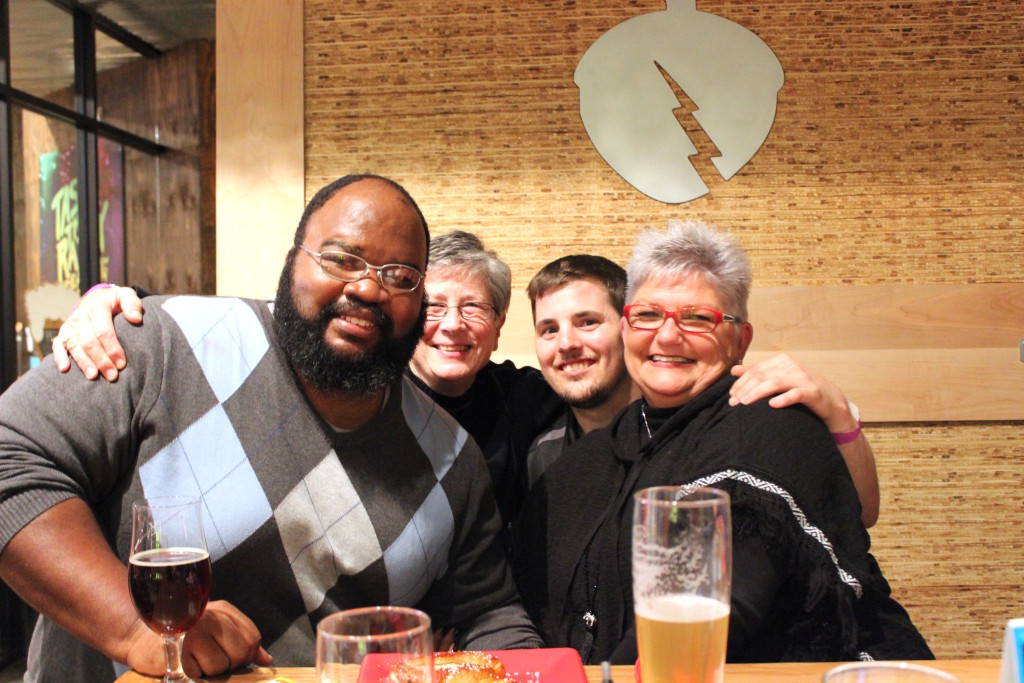 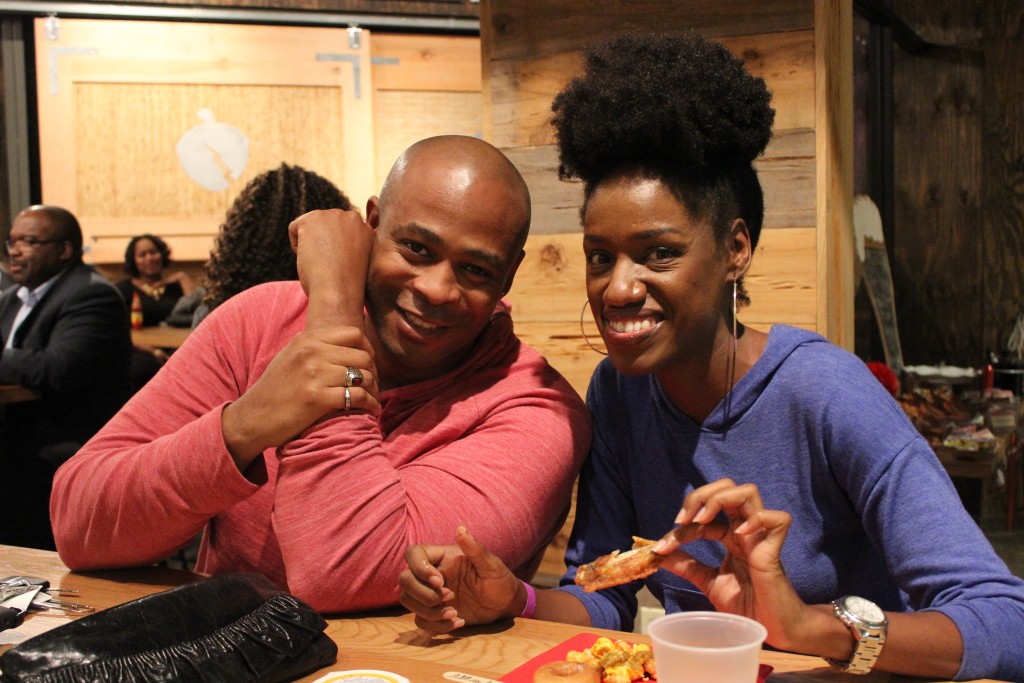 We sent all of the guests home with favor bags of beer bread mix. I used the recipe that I found here but didn’t provide the beer, so the guest could decide what to do with it. One of the guests took it home and used it as batter to make fried chicken and said it was the best chicken she’d ever had! LOL!

Happy birthday my love and I can’t wait to do it big again in 5!

Thanks again to my dear friends who helped me to pull this off and thank you to my contributors: